When installing or owning a fire, fitting protection can be seen as an extra cost that seems unwarranted and it can be hard for installers to stress the importance of fitting rain and bird protection to the top of a chimney.

Recently we were asked to help replace an old inset gas fire that had been condemned, we were more than happy to help this new customer with their fire troubles and see if we could either fix or replace what they currently had.

When we arrived at the property to get an idea of what would need to be done, some telltale signs started to become apparent. 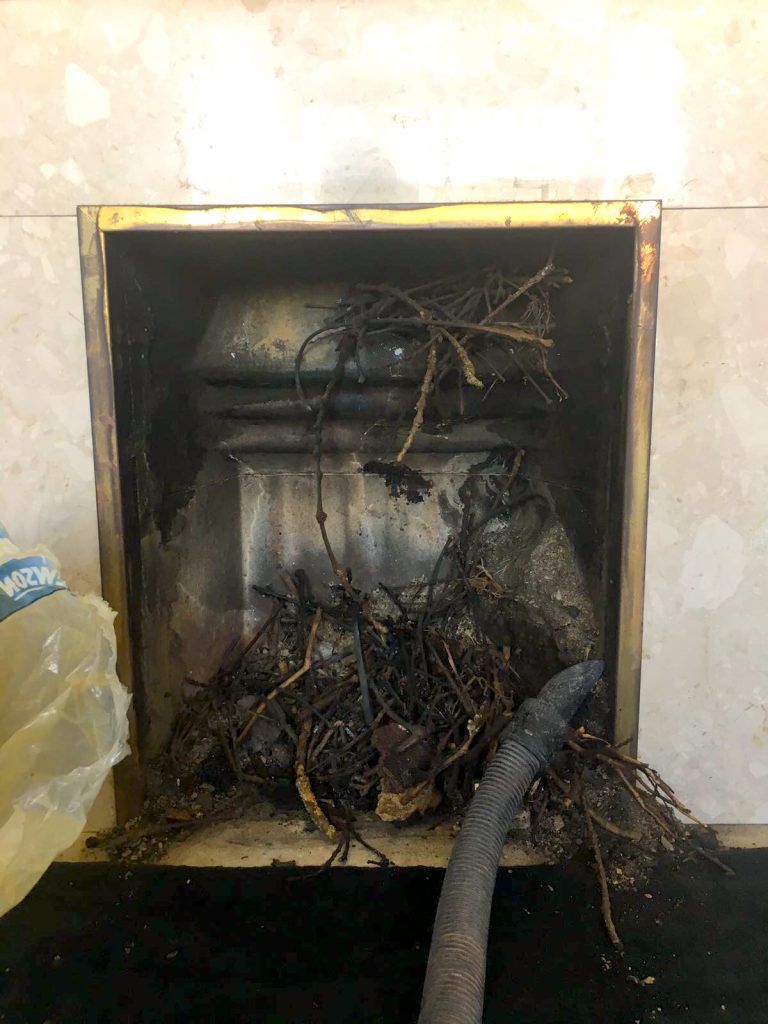 There are many reasons an appliance may stop working correctly, from appliance issues to chimney issues and figuring out where the problems are can involve some investigating but can help to avoid more trouble in the future.

The old gas fire in this customer’s property had some twigs and leaves that had fallen through the chimney onto the burner, this can be quite dangerous, especially if a fire is running when these fall down.

Current gas fires have built in safety measures to shut the fire off if there is an issue with the appliance, older fires don’t necessarily have these features and can therefore be dangerous if the appliance and chimney isn’t cared for. 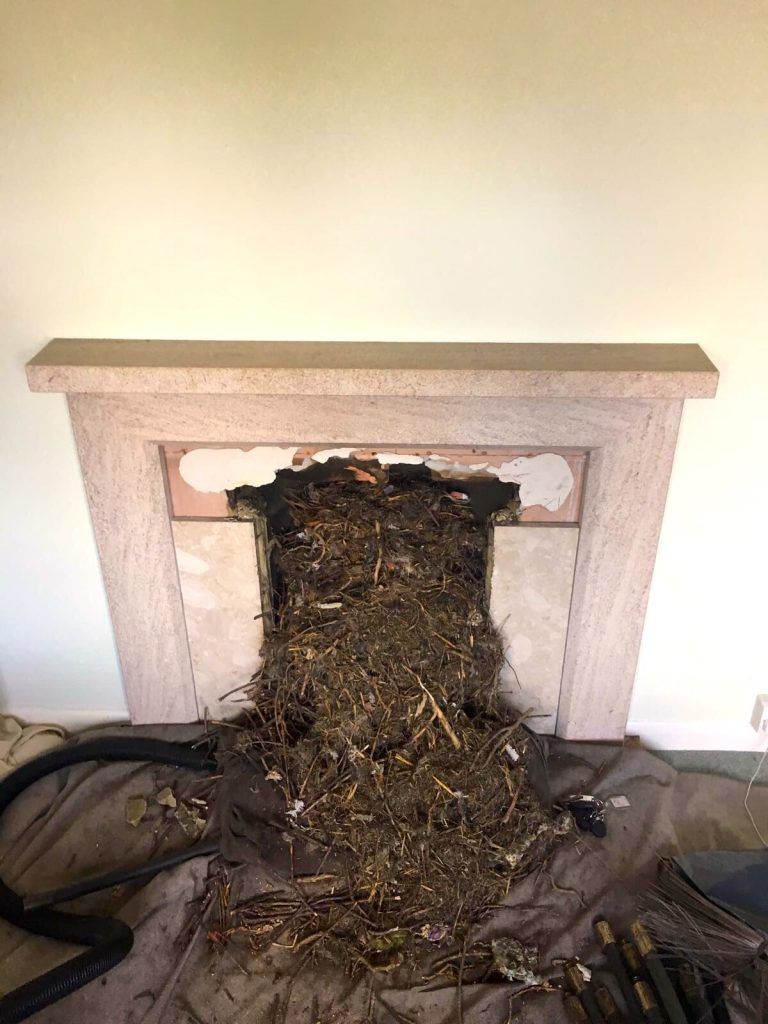 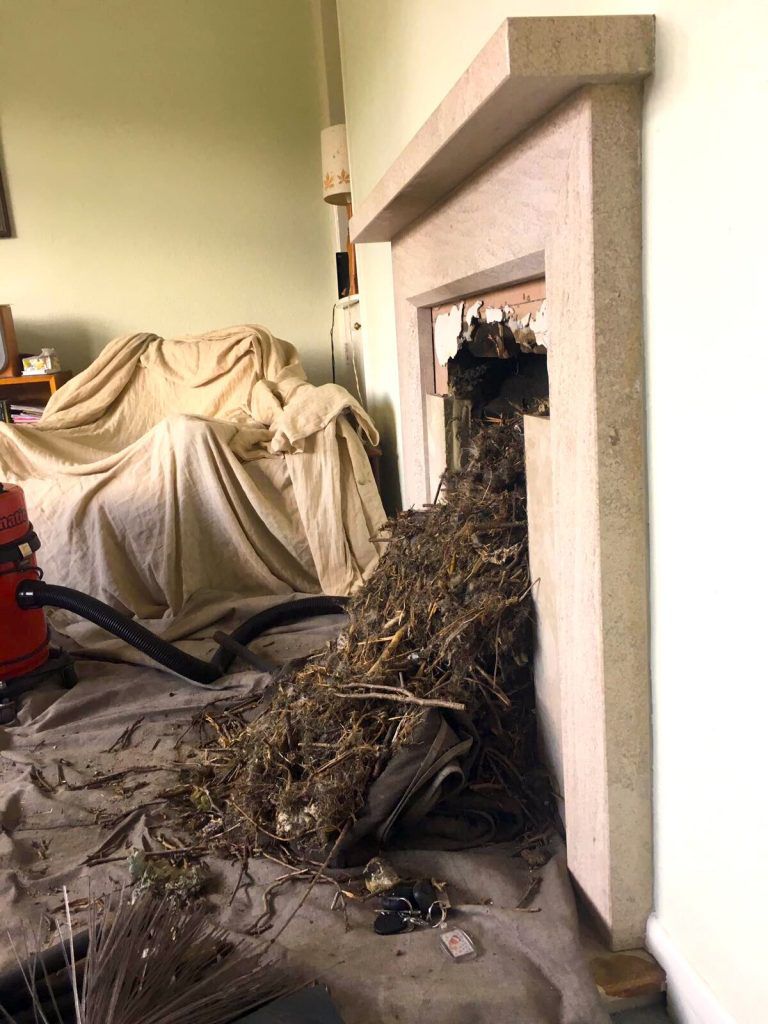 The twigs and leaves were a sign that a bird had likely made its nest in the chimney, a common issue with un-protected chimneys.

A sweep like this can be a lengthy and expensive process that is easily avoidable by adding protection to the top of your chimney.

It took the chimney sweepers from ‘Cleansweep’ an hour and a half to fully unblock the chimney and remove the birds nest from the property.

Adding protection can help to prevent birds nesting in the chimney, downdraught and rain, all of which are common issues with an unprotected chimney pot.

For more information on protecting your chimney or to organise a chimney sweep, call or visit us in our showroom. 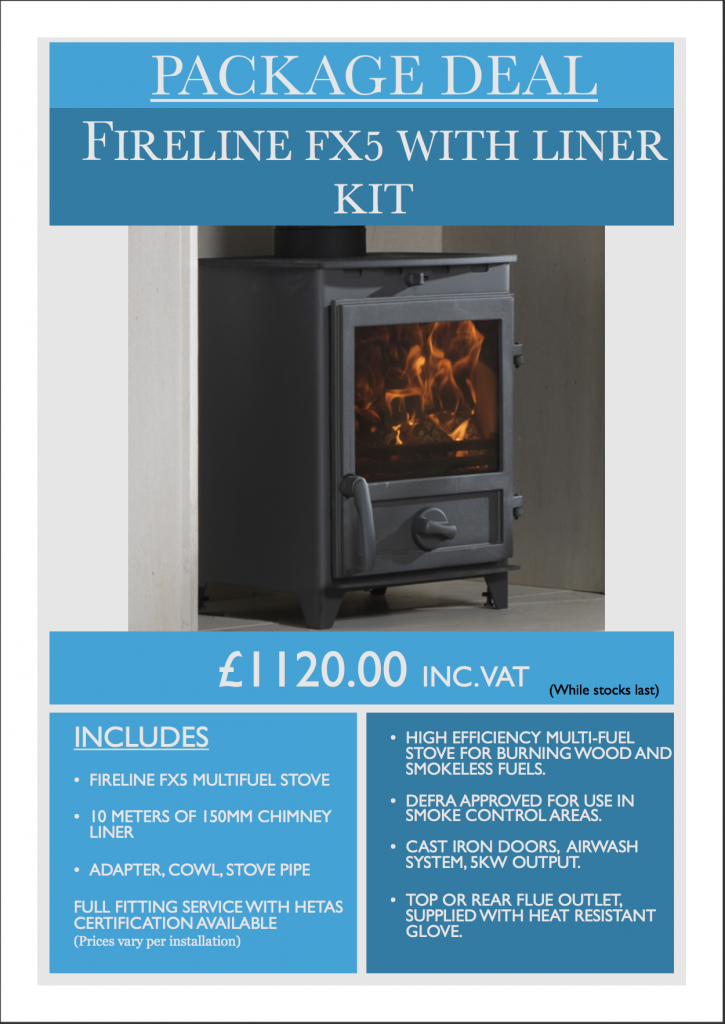 Choosing the right stove for your home can be a minefield, whether it is matching the colour with your furnishings or having the glass big enough to show off that flame picture you love so much, it’s not an easy decision.

With so much choice on the market at the moment it can be easy to forget one of the most important things, how well does your chosen stove burn the fuel?

Making sure your stove not only provides sufficient heat and looks good but also knowing it is efficient and clean burning is all part of having the perfect stove for your room.

Here at Wakefords we like to make sure that the stoves we recommend can take the heat and stand up to the test. We had a new Town & Country Saltburn stove put into our showroom by Alex, one of our skilled fitters, and wanted to put it through its paces, so we can say with confidence that these British made stoves are a cut above the rest.

We spent an afternoon purposely burning the wood in our stove at a low heat with minimal aeration, so we could create incomplete combustion (not something we would recommend doing) which coated the door in soot and other products of incomplete combustion making the glass almost opaque. Overnight we let the particulates really stick to the glass, so we could give its airwash feature a real test. 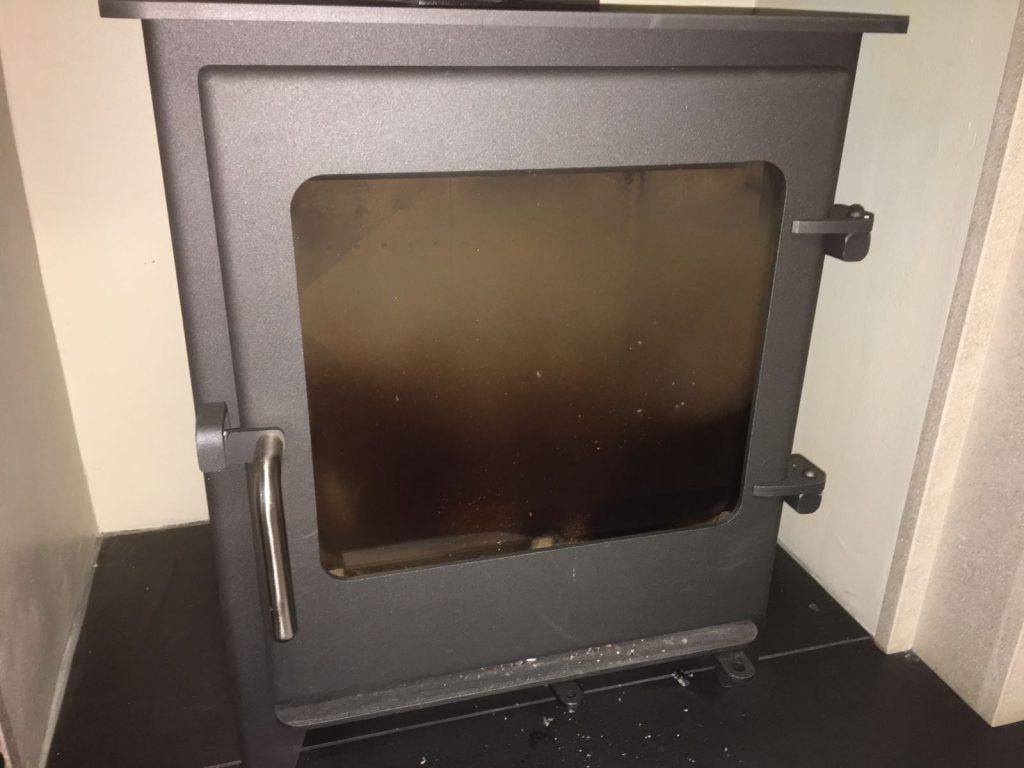 The next morning we set up a camera and recorded a time-lapse of the stove cleaning itself with nothing but kiln dried wood and air.

The airwash system working well is a good sign of a clean burning and efficient stove.  The airwash is usually delivered by secondary air being directed down along the front of the glass.

The air is heated as it is drawn into the stove and washes over the glass removing the products of incomplete combustion. This keeps the glass clean for that nice flame picture you so carefully chose.

As we expected the Town & Country Saltburn Multifuel Stove performed a perfect example of a well functioning airwash system. The glass cleared in under an hour and only needed a quick wipe down to have it back to new. 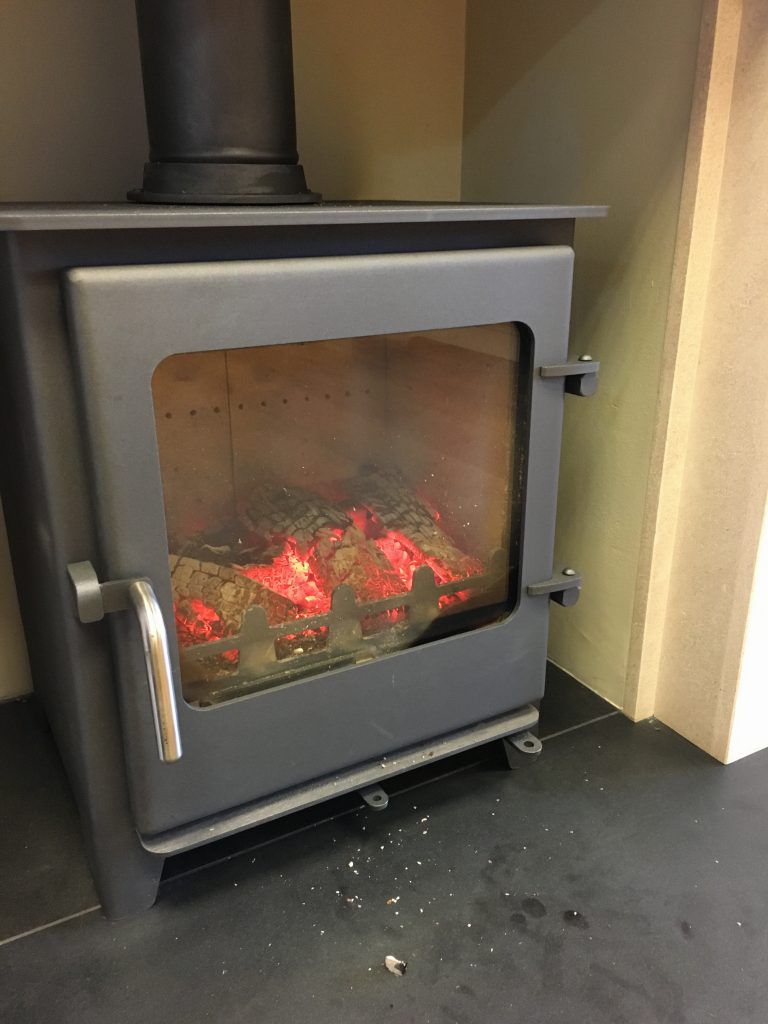 One thing worth remembering about an airwash system, it won’t function properly on sticky tars that come from burning unseasoned wood or other prohibited fuel types. The moisture can lower the temperature of the stove causing incomplete combustion and can reduce the effectiveness of the airwash.

For an example of burning wet wood, or fuels that aren’t appropriate for a stove, another article on this at its most extreme is available to view on our news page.

The Saltburn Multifuel Stove is one of a range of highly efficient, clean burning stoves from Town & Country that give a great example of what modern stoves can do. For more information on the Saltburn and other Town & Country Stoves visit their website: www.townandcountryfires.co.uk or visit our showroom to see the Saltburn in action. 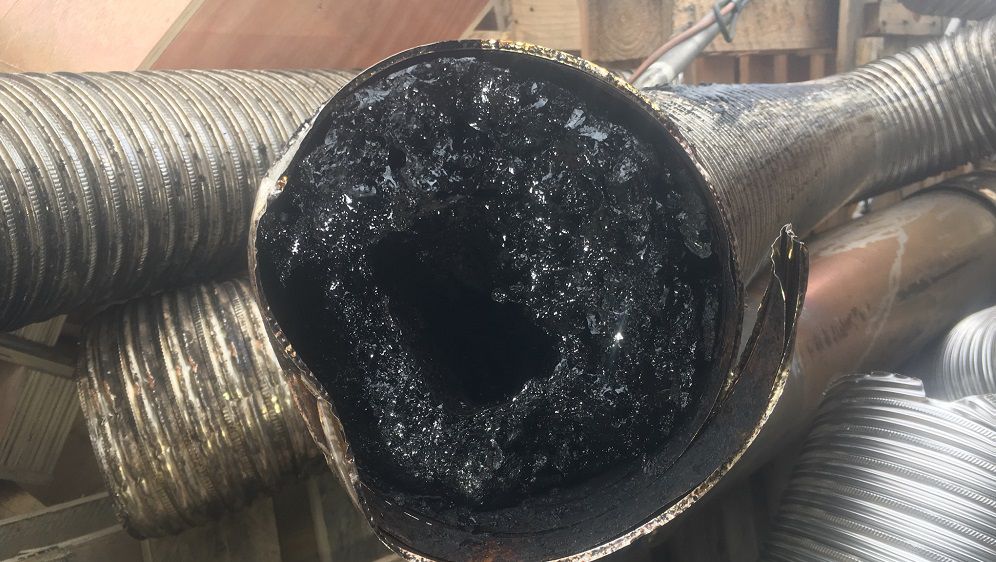 In the sunny September of 2016, we were called to a client’s property to replace a stainless steel liner that was fitted by another company a few years before. Before arriving at the property, we were told the stove was emitting an unpleasant smell and the customer’s chimney sweep had informed them that the liner needed replacing.

We removed the rain cap from the top of the chimney and very quickly discovered the reasons for the troublesome stove. As a little background: the chimney is the flue way and its job is to remove products of combustion from the house and into atmosphere as quickly and efficiently as possible. It does this by using the simple physics of heat rising: the hotter the fire, the hotter the air and the faster it travels in an upward direction.

For the flue to be most effective, the air travelling up it needs to be as clean and as hot as possible. That is why the choice of stove, but even more importantly, the selection of fuel is so important. Choosing a higher quality of fuel will result in better combustion and more heat produced. More about this later…

So, standing at the top of this beautiful house having just removed the rain guard, we gazed down the chimney into what should have been a shiny 150mm diameter stainless steel liner. Unfortunately our investigation revealed a gruesome reminder of why it is so important to make sure you are burning dry wood and that your stove is running as hot as possible by maximising combustion.

Over time a significant amount of tar had built up, clinging to the inside of the liner, reducing the diameter more and more each time the stove was used. The problem is at its worst at the top, the coldest part of the flue, where the hot gasses have cooled the most. In this case, the last 6 to 8 feet of the liner had a space of about two 50p pieces.

Considering the liner should have been 150mm (6 inches) in diameter we were surprised there hadn’t already been serious health issues. Discovering the existing liner was beyond repair, it was time to remove it from within the 250 year old brick-built chimney. 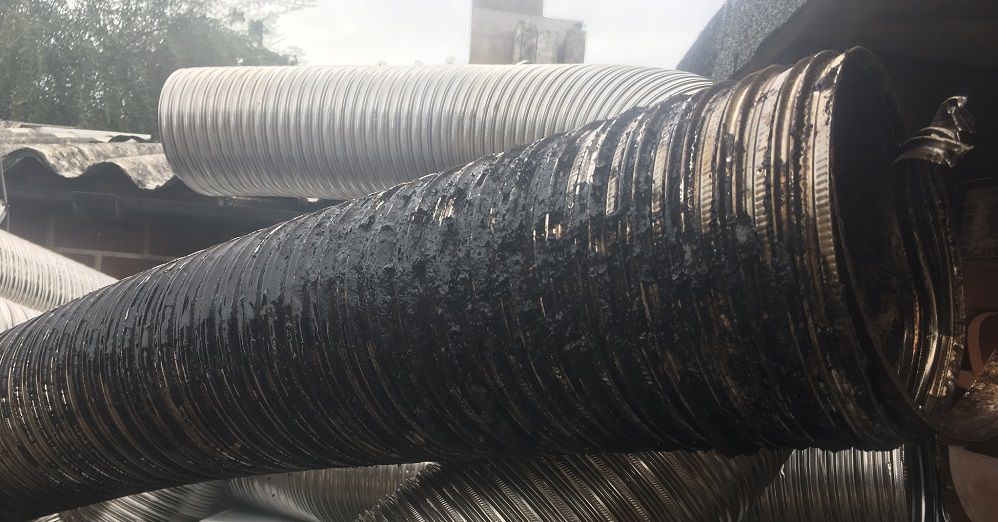 Flexible liners are made of stainless steel and vary in length depending on the chimney they are lining. While they’re not light weight, they’re not too heavy either. But as we removed this liner, the extent of the damage began to show simply in just how heavy it was. The sheer amount of combustible material that filled the liner was so bad that in places that it began to crumble and fall out the bottom in coal-like chunks. This wasn’t even the full extent of the damage as the outside of the liner was slick with sticky tar and the bonfire-like smell spread everywhere.

It was a close call with a liner in this state as the damage was so widespread that using the stove could not only have exacerbated all the prominent issues but it could also have been lethal. It is the flue’s job is to remove gases from combustion safely out of the room, however, if these gases can’t escape through the flue due to tar build up these gases can only escape into the room. This can lead to real health risks like carbon monoxide poisoning that can be lethal.

Making sure the fuel you’re burning is dry and that the stove is combusting as efficiently as possible can all help to avoid build up like this. So give a wood burning stove the care and attention it deserves and help prevent combustible build up like this.

A man had a vision, and thanks to his persistence he finally got what he wanted with help from Wakeford Fireplaces and exodraft
A developer took great pleasure in designing his own house. He had an eye for detail and when he was nearing completion, he wanted to install a fireplace, but not just any fireplace. To suit this exquisite and personally designed house, the fireplace also needed to have that perfect personal touch, and he certainly had a very specific idea of what the fireplace should look like. And part of that design demanded a short flue.

He visited several fireplace shops in the area, but unfortunately, the answer was always the same: This is not going to work! No one was able to help him or in any way suggest any alternatives of interest, but he still held on to his vision for the fireplace and wasn’t about to give up that easily. 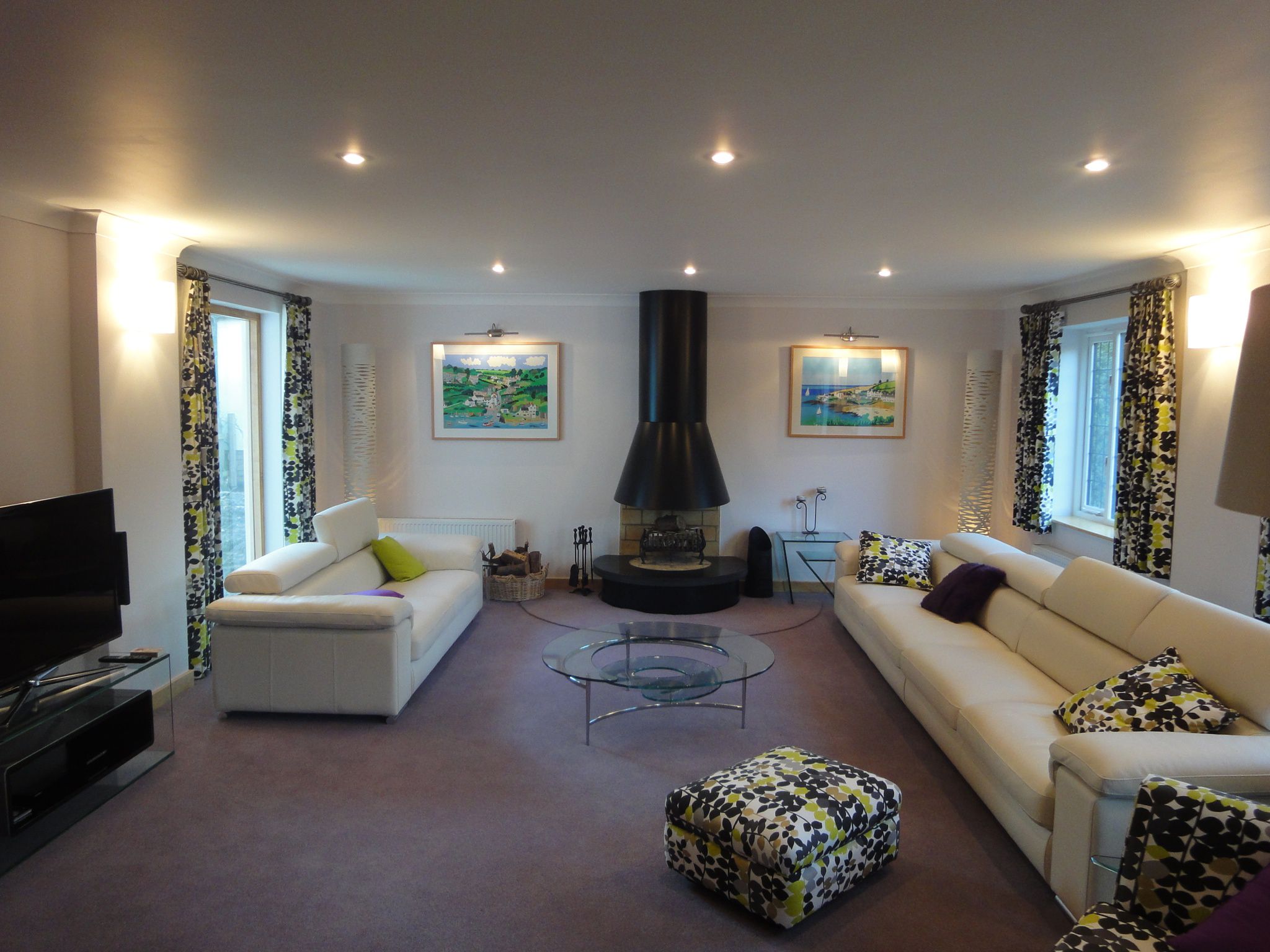 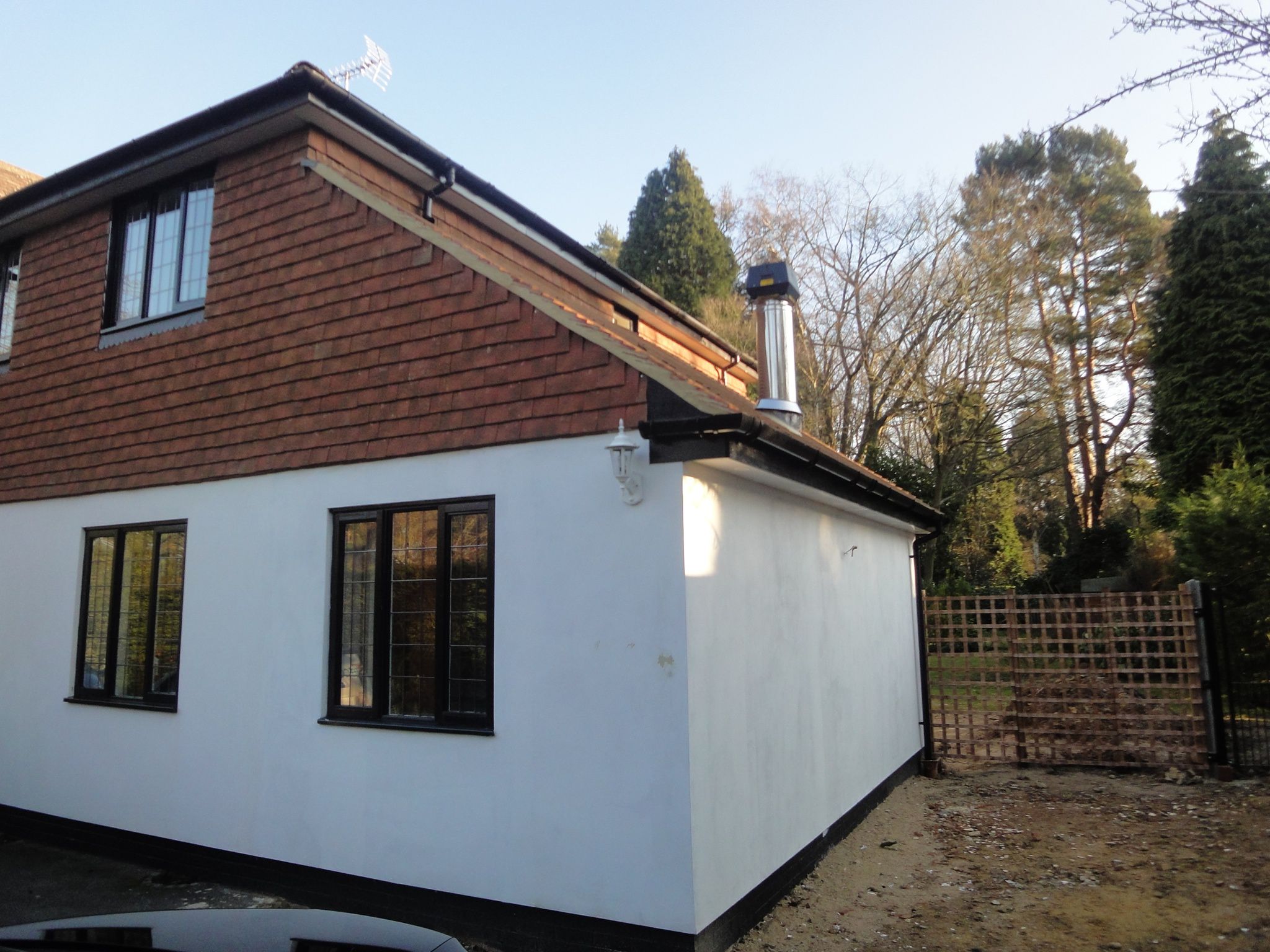 Finally, he came upon Wakeford Fireplaces in Surrey, where he spoke to Adam Wakeford, the owner.

He explained his idea and the problems as well as the negative responses he had encountered so far. Luckily Adam Wakeford
was familiar with exodraft chimney fan systems and had installed a number of systems with great success at several of his customers. Adam knew the benefits of the systems, and he was quite confident that this customer’s dream could come true using the exodraft chimney fan. Adam Wakeford and Keith Brant from exodraft UK discussed the customer’s project and agreed on a recommendation. The solution proved to be a success. 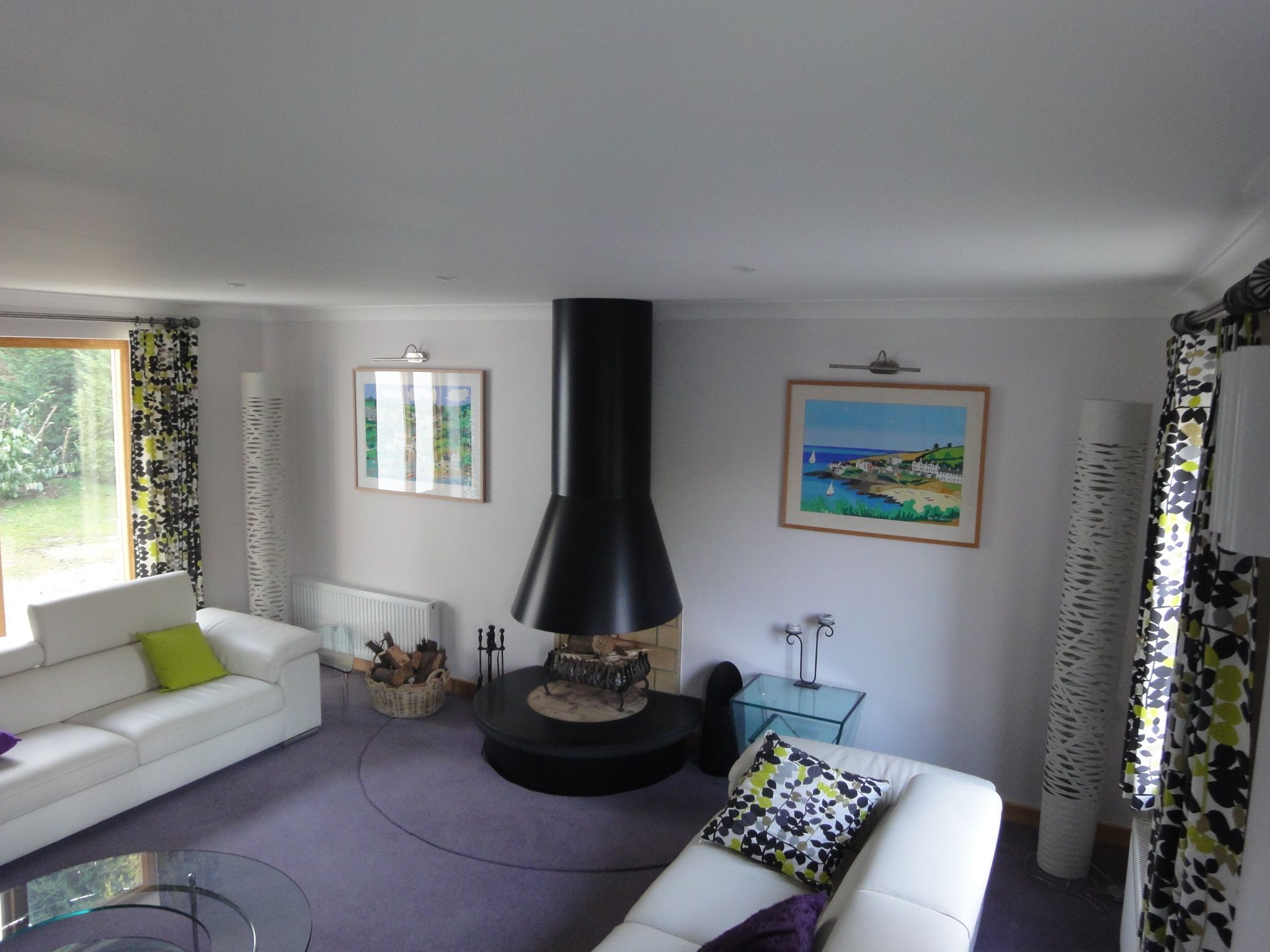 The customer was delighted. He had the fireplace of his dreams and it all worked perfectly.

“This is the second stove we’ve had fitted by Wakeford’s, the first installation was fairly simple with the second being more complicated, both installations were carried out very professionally, on time and once commissioned, (apart from our new stove installation) we wouldn’t have known they had been here, spotless. The fitters were very pleasant, Adam was very accommodating and made sure all … END_OF_DOCUMENT_TOKEN_TO_BE_REPLACED

“A no fuss professional who knew exactly what he was doing and carried out work to a very high standard. He didn’t just disconnect the supply, but removed the pipe to ensure it was obscured from view for new installation, so absolutely no need to guide on the aesthetics, which means a lot to us ladies! He protected all surrounding area with dust sheets and hovered up afterwards – what more could y… END_OF_DOCUMENT_TOKEN_TO_BE_REPLACED